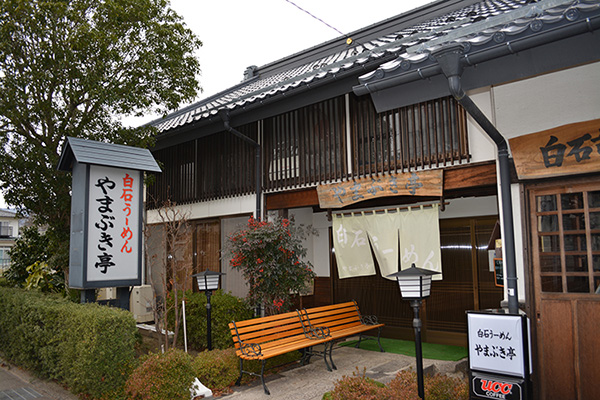 A renovated interesting shop built during the late Meiji period displaying documents, and selling local specialties. Furthermore, you can enjoy the famous Shiroishi U-men available at the [Yamabuki-Tei] within the premises.

The history of the Shiroishi U-men Roughly 400 years ago, there was a local named Suzuki Ajiuemon who lived near the Shiroishi Castle.
Due to a stomach illness, Ajiuemon father was bedridden and had to fast for several days. Ajiuemon was extremely worried. While he was searching for a suitable diet for his father, a traveling monk taught him how to make noodles without using any oil.
Ajiuemon immediately introduced the warm dish to his father. His father started showing signs of recovery and thus Ajiuemon had his father on the diet until his father made a full recovery. Perhaps it was because the noodles made from wheat flour kneaded with salt water, had a smooth texture and were easy to digest, Ajiuemon father made a speedy recovery.
When the story of filial piety made it way to the feudal lord then, he named the dish [U-men] to honour the compassion of travellers. Since then, locals started producing and selling U-men due to demand from neighbouring areas.