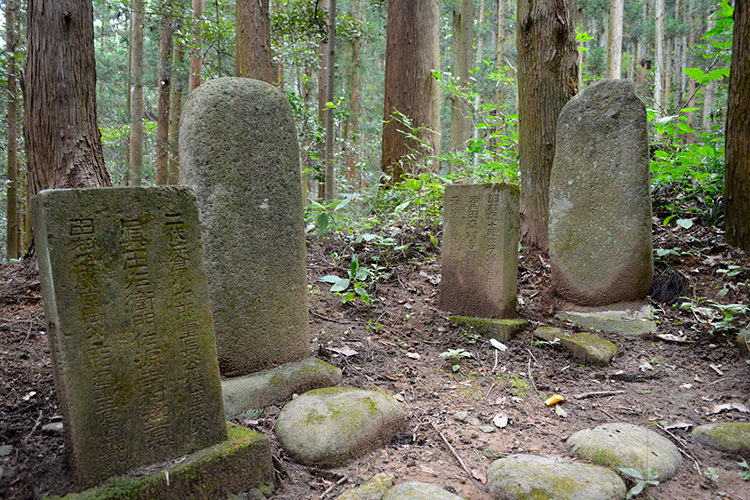 The tomb of Tamura Kiyoaki, the castle lord of Miharu Castle and the father of Megohime (wife of Sendai Feudal Lord Masamune Date), is located at a quiet corner on Mt. Atagoyama where the Katakura Gobyousho stood. After the death of Lord Kiyoaki, the territory of Kiyoaki is taken over by Toyotomi Hideyoshi, the surname of his adoptive heir Muneaki is changed to “Ushikubiri Sadaaki”. It is said that Muneaki together with his son hid themselves in Igu County of Miyagi Prefecture. After that, under the order of Megohime, the second generation castle lord, Katakura Shinenaga invited Muneaki and his son to live in Shiroishi. Sadahiro inherited the name of Katakura Kita and changed his name to Katakura Kinbee. Sanada Yukimura, who was once an orphan, took Oshiyoubuhime as his wife and became a warrior at 300-Ishi. He then designated a tomb site on Mt. Atagoyama where Katakura Gobyousho resided and erected a tomb for his father Kiyoashi. He held memorial services for his family members and after his death, he was buried together with his wife in this place. Beside the tomb of Oshiyoubuhime is a nameless tomb that is said to be of her father’s, Sanada Yoshimura.